Foreign Poachers are on the Loose in Sabah

Two pygmy elephants and a hundred sea turtles. These are just the latest victims of poachers in Sabah. Conservationists and government officials are duly outraged at the continuing slaughter of the state’s endangered wildlife.

“The recent discovery of hundreds of turtle bone fragments and turtle carcasses floating in the sea are deeply saddening, as are the numerous cases of pygmy elephants being killed, their tusks brutally cut off and the poor animals left to die a slow and painful death in the rivers and forests of Kinabatangan and Tawau,” Wan Junaidi Tuanku Jaafar, minister of Natural Resources and Environment, stressed. 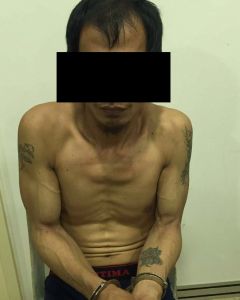 An indigenous poacher from outside Sabah who has been caught in the Malaysian state. Photo Credit: Sabah Forestry Department

The situation is indeed dire. Poachers continue to murder endangered animals around Sabah and Sarawak with wanton indifference to the fate of the species they are driving ever closer to the brink of extinction in the two Bornean states. Many of those poachers are known to be foreigners who come to Borneo from as far away as the Philippines to make a killing, both literally and figuratively speaking. Wildlife officials routinely encounter Kenyahs and Dayaks from Kalimantan who arrive in Malaysia with the aim of trapping sun bears for their paws and teeth, hornbills for their beaks, elephants for their tusks and other rare animals for their body parts.

These foreigner poachers, explains the Sabah Forestry Department, “come with weapons, particularly homemade shotguns, spears, trapping devices, swords, and with the audacity and arrogance to confront enforcement officers. At the same time, [they] destroy public properties to assist in their poaching (e.g. by cutting government water tanks as floaters for wildlife parts down river for collection).” Many of these poachers are highly skilled at tracking and killing animals.

Conservationist groups like WWF-Malaysia are working with local wildlife officials to boost anti-poaching measures, including the use of sniffer dogs and better-trained protection teams. Yet we can’t just blame foreigners. Locals and local indigenous people, too, are responsible for much of the continued slaughter. Foreign poaching networks can routinely rely on help from locals who know their forests inside and out. Sabah’s forestry officials have gone so far as to call such locals “traitors,” and not without reason.

We must stop foreign poachers in their tracks in an effort to save Sabah’s and Sarawak’s beleaguered wildlife. Yet we also have to foster a greater appreciation of Malaysia’s unique biodiversity among local people, especially children who are the future custodians of the country’s natural resources. “It is a testament to our level of civilisation when we are able to live in harmony with the flora and fauna in our country, which have every right to exist on earth as we humans do,” Wan Junaidi has noted.