Officials at KLIA seize Pangolin Scales sent in the Mail

At times wildlife traffickers try to smuggle animal parts out of Malaysia in suitcases at airports. At other times they do so by sending such illicit merchandise abroad by mail. They are quite brazen, yes.

Thankfully, alert customs officials can and do regularly step in and stop the shipments from leaving the country. And so it was that officials at Kuala Lumpur International Airport’s Mail and Courier Centre discovered pangolin scales weighing a total of 337kg. The scales had been packed into 13 boxes and mailed from Kuching in Sarawak and Kota Kinabalu in Sabah to an address in Hong Kong. 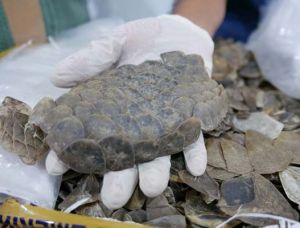 Some of the scales seized at the airport. Photo Credit: TRAFFIC

Such shipments are hardly unique. In fact, not a month goes by these days without yet another seizure of pangolin scales, usually at KLIA. Last May, for instance, customs officials there discovered scales stuffed into 18 gunny sacks weighing 712kg.

“This latest seizure brings the total weight of scales confiscated by the Royal Malaysian Customs to a staggering 15 tonnes in just seven months,” TRAFFIC explains. “It is not known if the scales — which range from very small to very large — are from Asian or African pangolins, or a mix of both.”

The frequency with which illicit shipments of pangolin scales are discovered indicates not only that the trade in these critically endangered animals remains unabated but that trafficking syndicates are undeterred by the prospect of getting caught. Needless to say, many other shipments may well go undetected. Unless drastic measures are taken, the eight subspecies of pangolin in Africa and Asia are destined to go extinct in the wild within a few years. In he past decade an estimated 1 million of these shy and reclusive mammals have been poached for their scales and meat, which are prized in traditional medicine and exotic dishes.

“This case has unveiled just how complex and diversified a smuggling web can be,” notes Kanitha Krishnasamy, acting regional director for TRAFFIC in Southeast Asia. “Logistics and courier services must realise that they are not exempt from being exploited by traffickers and must step up and improve monitoring of what they are transporting,” she adds. “These recent seizures highlight a well-established network in Sabah and Sarawak, illegally collecting, sourcing or exporting pangolin scales.”