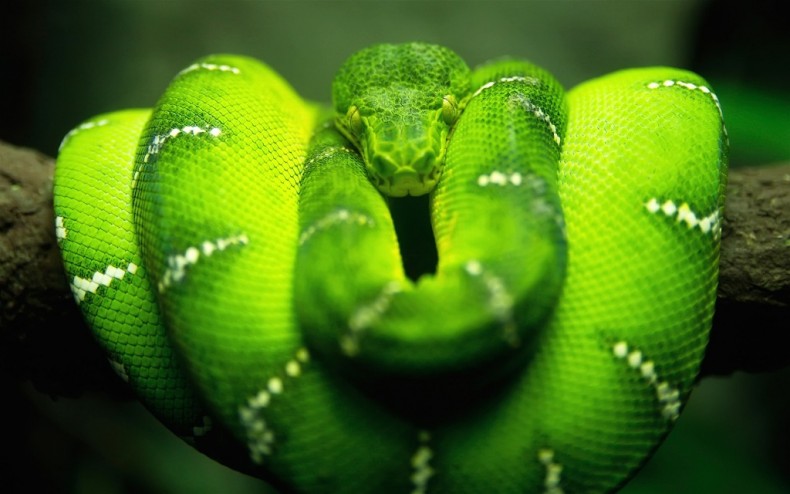 The arboreal tree green python, which grows to a length of around 1.8m, is prized for its beauty by some exotic pet lovers. The endangered snake is protected by CITES. Photo Credit: wallpapersdb.org

A case in point: Two Malaysian men, bound for Kuala Lumpur, were arrested at Jakarta’s Soekarno-Hatta International Airport with a total of 23 reptiles and amphibians hidden inside their luggage. Airport officials stopped the Malaysian pair when they “noticed something odd in the X-ray scans of their luggage.”

That something odd turned out to be seven pythons, seven lizards and nine frogs packed in bags. Among the pythons were several endangered green tree pythons (Morelia viridis), listed as a totally protected species by the Convention on International Trade in Endangered Species of Wild Fauna and Flora (CITES). Needless to say, the two Malaysian smugglers did not have permits required for owning or transporting any of the animals in their possession. The animals were likely destined for the exotic pet market in Malaysia. 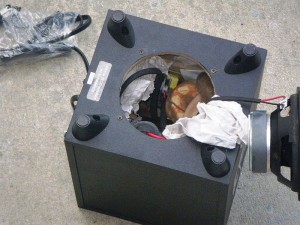 Endangered snakes are found packed into a speaker after a wildlife smuggler planned to spirit them through Customs. Photo Credit: Wikimedia Commons

“Efforts such as the enforcement action taken in this case in Indonesia are essential,” said Chris Shepherd, regional director in Southeast Asia for the international anti-trafficking watchdog TRAFFIC. “Indonesia, with its amazing diversity of reptiles and amphibians, remains a major target for smugglers and illicit wildlife dealers and we urge authorities to maintain their vigilance.”

So does Malaysia. Shepherd has also urged Indonesian authorities to collaborate with their Malaysian counterparts to tackle the issue of international wildlife smuggling. No endangered species escapes the attention of unscrupulous traffickers. In July last year, Malaysian wildlife authorities arrested two locals and two Indonesians who had been offering young orangutans for sale online. Recently Malaysia made headlines after the large scale of online wildlife trafficking in the country became painfully apparent.

In what must be seen as a disturbing trend, it’s not only criminal syndicates but also opportunistic citizens who are engaging in wildlife trafficking to supplement their incomes. In early February, after a pregnant female tiger was killed in a road accident while she was crossing the East Coast Expressway 2 in Terengganu, a men rushed to the scene. He did so not to help the animal but rather to dislodge the dead tiger’s fangs with a hammer. This he did in full view of others at the scene and proceeded to steal the teeth with an accomplice.

What they did is a crime under the country’s Wildlife Conservation Act and arrest warrants were duly issued for the two men, one of whom was believed to be a foreigner. But forget the illegality of the act; consider what kind of person does such a thing. The morally bankrupt kind, it’d seem.