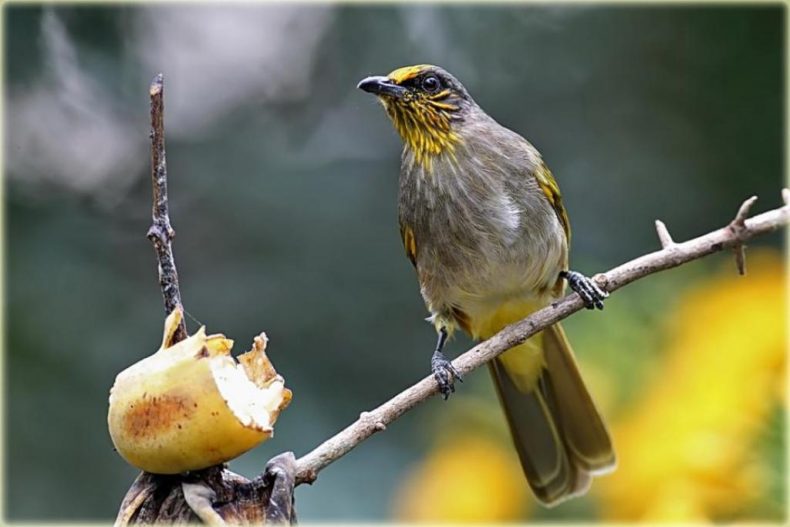 A stripe-throated bulbul (Pycnonotus finlaysoni) perches on a branch. Wild bird like this belong in the wild, not cages in homes. Photo Credit: Internet Bird Collection

A motorcycle repair shop that doubles as a den of wildlife trafficking. That’s what Malaysian wildlife officials, acting on a tip, discovered in Jitra, a town in Kedah. They arrested a 22-year-old mechanic, who had been keeping and selling several species of protected birds.

The illegally kept birds found on the premises included white- and black-shouldered kites, watercocks, white-rumped shamas, blue-winged leafbirds, and striped-throated bulbuls. Several of these birds are having an increasingly hard time in the wild across Malaysia owing to relentless habitat loss and rampant poaching.

Unfortunately for them, bird lovers come in several forms, some of which aren’t exactly benign. Whereas bird watchers are generally content with observing rare birds in their natural habitats and leaving them in peace, others want to cage these birds and reduce them to a life of captivity in their living rooms or backyards.

The mechanic said he had caught the birds in nearby forests himself and had been selling them through social media sites for between RM2,000 and RM8,000 apiece. If convicted of selling protected wildlife without permits, the man is facing a maximum penalty of three years in prison or a fine of RM100,000, or both. He is also facing charges of hunting protected wildlife without a permit, which carries a further penalty of two years in prison and a fine of RM50,000.

And so it goes. Another week, another case of blatant wildlife trafficking coming to the attention of the authorities. Social media platforms like Facebook and WhatsApp have become hotbeds of wildlife trafficking with myriad otherwise law-abiding Malaysians supplementing their incomes by peddling protected species – be they mammals, birds or reptiles.

A lot of it could be driven by simple ignorance. Many Malaysians who buy or sell exotic pets online occasionally may not even know that by doing so they break the law. “Many do not realize that selling protected animals even as pets is an offence under the Wildlife Act,” a senior wildlife official in the state of Kelantan recently noted. “The public must apply for a special permit to keep the animals.”

Better yet: Malaysians should be encouraged not to keep any protected species at all. Cats, dogs, hamsters and other domesticated animals can serve as wonderful pets. In fact, they are far more suited for living in captivity than wild animals, which invariably end up suffering stress even in the best of captive settings. This applies especially to wild birds that spend most of their time flitting around trees and roaming far and wide in the wild. They do not belong in little wicker cages.